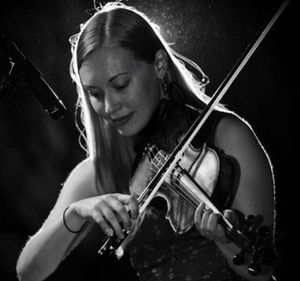 Amanda Kerr grew up within the nurturing musical community of Anchorage, AK. Her fiddling career started with a Cracker Jack box with a ruler taped to it. Somewhere around 10,000 "Huckleberry Stop Stops" later she began traveling to fiddle contests around the country. Her titles have included the Alaska State Fair Grand Champion, Western Open Junior & Grand Champion, and the National Junior Fiddle Champion.
In 2003, Amanda started teaching music lessons. What started out as teaching a couple of students per week in her parents' living room quickly turned into a full-time teaching studio. After studying music education at the University of Alaska, Amanda went on to complete teacher certification for Suzuki Method (Every Child Can, The Joys of Pre-Twinkle, Suzuki Principles in Action, Teaching with an Open Heart, Teaching from the Balance Point, Suzuki in the Schools Unit 1, and Violin Units 1 through 4), and Music Mind Games (Unit 1). The methods and traditions that gave her the technique she uses today is now being passed on to the next generation of fiddlers.
In addition to teaching private lessons, Amanda also teaches group lessons, workshops, and camps. She currently is the Orchestra teacher at the Anchorage Waldorf School where she teaches violin, viola, cello, and bass to grades 3-8. While living in the Washington DC area from 2014-2016, Amanda taught Suzuki Violin, fiddling, and Music Mind Games group classes with Stephanie Flack and Russell Fallstad as a part of the "Heartstrings Academy" in Alexandria, VA. Every summer, Amanda continues to teach fiddle at many music camps in (and out) of the country.
Amanda loves performing just as much as teaching. She often plays with High Lonesome Sound and the Anna Lynch Band. You can hear her fiddling on Anna Lynch's self-titled album that was released in 2014. When Amanda is not teaching (or "Momming" her two young children), you can occasionally find her performing around town with her husband, Dan Booth.